WHY YOU NEED TO GET OUT OF YOUR OWN HEAD SPACE 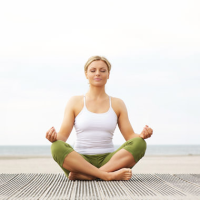 Aside from fame, what do Jerry Seinfeld and Sir Paul McCartney have in common? What about Russel Brand and Kate Hudson? Not sure? How about the Dalai Lama and Red Hot Chilli Pepper front-man / reformed drug addict Anthony Kiedis? Still don’t know? Believe it or not, every one of these diverse figures are devout practitioners of meditation.

When most people think of Jerry Seinfeld they think comedy. They think of stand-up routines, and witty observations and his hit-show Seinfeld. They think of bad nineties fashion and New York and expensive cars. But meditation? Certainly not. Unsurprisingly, the rare known fact is that Seinfeld is a man of meditation. More than that, he is a long-time practitioner, having discovered Transcendental Meditation over four decades ago, back when he was a spotty, lost teen.

In a Podcast interview with Alec Baldwin, Seinfeld explains that as a teenager he heard about meditation through a friend and decided to “see what that’s about.” He says that after learning the technique “it cleared up my acne immediately” and that he “had this great energy and focus.” These sudden results, manifested both internally and externally, converted him right then and there: “I’ve been doing it the rest of my life.”

Seinfeld isn’t the only one reaping the rewards of meditation, and nor should he be. Scientific research has found that the benefits of meditation can be physical and mental, while a 2009 study indicated that these benefits could extend as far as genetics. The leader of this research at Harvard Medical School, Doctor Herbert Benson, found that “disease-fighting genes” were more active in subjects who were long-time meditators or yogis. Those genes included ones responsible for fighting pain, infertility, high blood pressure and rheumatoid arthritis. To maintain the activity of these genes, researchers found the relaxation techniques needed to be consistently practised.

Furthermore, by achieving relaxation we reduce the stress hormones, leading to a boost in immunity and fertility. A teacher of meditation techniques, hypnotherapist Jake Toby agrees: “When you relax, the parasympathetic nervous system switches on. That is linked to better digestion, memory and immunity, among other things.” It’s no secret that meditation has long been credited with a rise in focus and energy. In this day and age, where we are constantly distracted by iPhones and an oversaturation of information, regaining that long-lost sense of calm and focus seems an almost impossible luxury. Seinfeld details this energy as a “really nice” one, rather than a toxic or manic one. “Here’s how I’ll describe it to you,” he elaborates. “You know how three times a year you wake up and you go ‘wow, that was a really good sleep’? Imagine feeling like that every day. That’s what it is.”

Along with this rejuvenated energy source comes an increase in overall harmony, happiness and creativity. Moreover, the mind becomes clearer while your emotional and personal consciousness becomes more acute. Hugh Jackman says that “nothing has opened my eyes like Transcendental meditation has. It makes me calm and happy, and, well, it gives me some peace and quiet in what’s a pretty chaotic life!” Regardless of your age, occupation or lifestyle, it’s crucial to find a strategy to disconnect. The trickle-down effects of achieving this self-contained ‘peace and quiet’ can infiltrate every facet of our lives, from making better decisions to being happier, which in turn will have more positive implications on our relationships and interaction with others.

Other celebrities like Kate Hudson and Russel Brand maintain that meditation has changed their lives. In her new book Pretty Happy: Healthy Ways To Love Your Body Hudson describes how mindfulness and meditation pulled her through a period of emotional upheaval. Similarly, Brand finds that his daily practice is instrumental in keeping him on the straight and narrow of sobriety. A former heroine and crack addict, Brand is now thirteen years sober and says meditation is its own “overwhelming” and “trippy” experience; “a shower for the brain.”

If you stack the pros and cons, meditation is brimming with benefits. In fact, there seem to be no actual negatives... Jerry Seinfeld even insists that it can be practised “anywhere.” But Jerry hasn’t yet heard of Rancan Sisters Fitness. Contact our meditation facilitator Jane Woods to book your session:0409 605269 or email us at info@rancansistersfitness.com.au.

Want some of what he’s having? It doesn’t take a dedicated meditator to see one thing clearly: time has never been better spent.

By Rose from Rancan Sisters Fitness.