Posted August 28, 2013 in Fitness News by Adele and Lisa Rancan 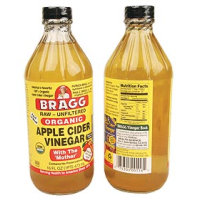 We recently visited SCOOP WHOLEFOODS in Mosman.  Scoop is a self serve store where you can shop for all your organic ingredients such as nuts, cacao etc. and then you weigh and pay at the checkout.  We picked up Apple Cider Vinegar, which is available from most health food stores.  We were reminded of the benefits, see below, of this age old tonic.

WHAT IS APPLE CIDER VINEGAR?
Apple Cider Vinegar is made from the fermentation of apple cider.  Fermentation involves a process in which sugars in food are broken down by bacteria and yeast.

Diabetes Benefits:
A study conducted in 2007 showed that when subjects with type II diabetes consumed two tablespoons of apple cider vinegar at night their glucose levels were lowered in the morning by at least 4-6%. (1)
Apple cider vinegar contains an active ingredient called acetic acid. Acetic acid is relatively sour and responsible for the lip puckering response that many people have when consuming apple cider vinegar.  Acetic acid has been studied for its ability to inhibit carbohydrate digesting enzymes. This means that enzymes like amylase, sucrase, maltase and lactase are not activated so when vinegar is in the gut these sugars and starches are less likely to be absorbed, thus they don’t have an effect on glucose levels.

Our personal review: We have found taken as a regular tonic it definitely assists with lactic acid build up, helps with fatigue and aids digestions. It's definitley worth a try!